Posted on November 5, 2012 by Vaughn Climenhaga

The stable manifold theorem is one of the most important in the theory of non-linear ODEs and dynamical systems. Unfortunately, some of the standard introductory texts (Hirsch–Smale, Perko) either do not give a proof, or do not motivate the proof, while more advanced texts (Katok–Hasselblatt, Barreira–Pesin) are too high-powered to be appropriate in the setting of an introductory graduate course in ODEs, such as the one I am teaching now. So I’m taking this opportunity to turn my hastily scrawled hand-written notes on a (hopefully) properly-motivated proof into something that will be legible to myself and others on a more permanent basis.

The form of the theorem we will prove is this: let

be an open domain and

the flow of a

is an equilibrium point for

be the stable subspace for

(the span of all generalised eigenvectors corresponding to eigenvalues with negative real part). Let

be the centre-unstable subspace for

(corresponding to eigenvalues with zero or positive real part). Then there exists

such that the set

has the following properties:

has an equilibrium point

, we can make the change of coordinates

and proceed as stated above. The choice

Proof: We present a proof using Perron’s method — this is essentially the proof given in Perko’s book, but with significantly more motivation and a more abstract viewpoint. The idea is to use the same general strategy that worked well for us in the proof of the Picard–Lindelöf theorem on local existence and uniqueness of solutions: prove existence and uniqueness of something by obtaining as the unique fixed point of a contraction on a complete metric space. In the Picard–Lindelöf theorem, the space was the space of approximate solutions, and the contraction was the Picard operator that transformed a candidate solution into something even closer to being a solution. Here we need to consider a slightly different space and operator. 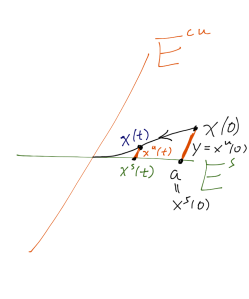 To this end, let

be the linear part of

at the fixed point, and let

be the restrictions of

be the maximum value of

, as shown below. Then all eigenvalues of

lie strictly to the left of

and all eigenvalues of

lie strictly to the right of

. In particular, we can fix a norm on

with the property that

. (Note that the second of these does not give decay to

, but does give some control on growth.)

We work in the space of all

with exponential rate at least

This is a complete metric space [Edit: No, it’s certainly not, as pointed out by David C. Ullrich in the comments below; to get completeness we need to consider all continuous

. To make sense of the ODE for curves that are merely continuous, we need to use the integral form presented below.] with distance given by

(The reader familiar with Banach spaces will note that

is in fact a Banach space.)

, we consider the subspace

. Here and throughout we will write

for the parts of

. The goal is to find, for each sufficiently small

that is a trajectory of the ODE

. Then we can put

has the properties claimed in the theorem. (In fact we will not prove that

, which takes some more work, but positive invariance and exponential stability will follow from what we show.)

Having defined our metric space

, we need to define an operator on it whose fixed points are trajectories of the system. As in the Picard–Lindelöf theorem we would like to define an integral operator. We cannot simply use the one defined there (

) for at least two reasons:

, so that the ODE becomes

then the solution is

is constant. So we differentiate this expression and use (3) to get

Integrating, we see that (3) is equivalent to

or more generally, by integrating from

Now by decomposing everything into the part lying in

and the part lying in

for some (and hence every)

. The reason for using non-zero values of

in the second equation is that we have good control on

, and so by sending

we may observe that

recalling the relationship between

illustrated in Figure 0. In particular, we may replace (6) with

The conclusion is that if we write

if and only if

solves (3). One may also understand the motivation behind sending

as follows: for a fixed

, we expect the first term from (6) to grow exponentially as

, which makes it difficult to verify the property

. By eliminating this term (and the corresponding growth in the integral), we obtain an expression that is more tractable in the limit

Now we show that

to itself, and that it is a contraction, which will complete the proof by an application of the Banach fixed point theorem. First we observe that because the non-linear part

of the vector field

, it is Lipschitz on small neighbourhoods of

, and the Lipschitz constant can be made arbitrarily small by making the neighbourhood small enough. More precisely, for every

Now we make a computation that shows both claims in the previous paragraph. Fix

be as above. Recall that by the definition of

Using the fact that

and recalling the definition of

to itself. Moreover, if

then it is apparent from (8) that

as well. Finally, if

small enough we can guarantee that

is a contraction. Thus it has a unique fixed point

. This is a trajectory of the ODE (3) which approaches

exponentially (with rate at least

has the properties claimed in the statement of the theorem.

A few remarks are in order. The proof here follows the proof in Perko’s book (p. 107–111), but includes more abstract language and more complete motivation. We have shown that

exists and its graph

is positively invariant with trajectories converging exponentially to

. One can also show that

. This proof is not in Perko’s book — he refers to the text of Coddington and Levinson (p. 332–333). If I feel ambitious I may try to include this part of the proof at a later point.

The proof given above also shows that

is the only trajectory with

that converges exponentially to

with rate at least

. In particular, any such trajectory lies in the stable manifold

. However, it is possible that there are trajectories lying outside of

more slowly — for example, there may be trajectories converging to

with subexponential speed along the centre direction

Ultimately, the only property of the subspace

have real part strictly greater than

. In fact, the entire proof above is valid if we replace

, because it corresponds to the directions in which the contraction is the strongest. There may be trajectories lying outside of

exponentially, but the rate at which they do so is less than

3 Responses to The stable manifold theorem